A pair of Spaghetti Westerns led off the viewing, both of which were released back in December to capitalize on Django Unchained. These have about as much to do with the original Django as Tarantino's movie does.

DJANGO KILLS SILENTLY is best described as "serviceable". There is really nothing special going on here and George Eastman as the title character doesn't come off as any sort of real legendary western hero. Even during the climax when it finally seems like the Django character in this flick is going to have a special moment he is quickly put into a compromising situation and has to rely on others. But like I said, it isn't all bad, it just isn't exceptionally good. There are many of the classic spaghetti western cliches which keep it entertaining enough even if it becomes a checklist of cliches. 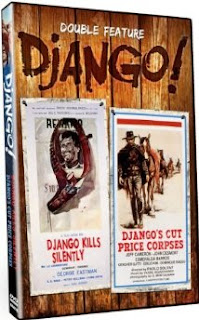 Then there is DJANGO'S CUT PRICE CORPSES and this is a prime example of a cool title with a movie that doesn't live up to it. A rather lame and tame western that would maybe be okay at the end of a SW triple bill after you've seen a couple good ones and already have your western appetite satisfied. While neither of these movies are particularly bad and it wouldn't be fair to say they're not worth checking out but there are hundreds of other Spaghetti Westerns worth checking out before you get to these. The price (around $5 or $6 for a nicely presented DVD) is right though.

I planned to watch more but it didn't happen... until tomorrow dear readers.