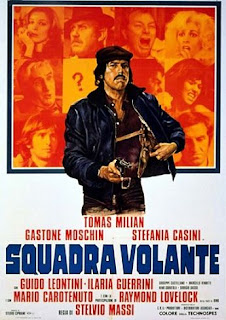 Day four of the challenge brings a couple of first time viewings, first off was EMERGENCY SQUAD, a poliziotteschi Euro-crime flick from director Stelvio Massi and starring the great Tomas Milian. After a deadly heist by a group of gunmen mocked up as a film crew detective Ravelli (Milian) notices striking similarities to the unsolved case that involved the murder of his wife 5 years earlier. Ravelli begins putting the pieces together to track down the killer and get his vengeance, even if he loses his police badge. This was a pretty great crime flick, from Massi's direction to the performances of the cast which has quite a few notable names. If you're a fan of crime movies you'll be better off having seen this one. 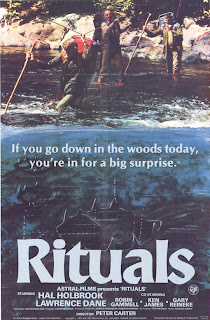 And I ended my night with a little piece of horror/exploitation that I've heard lots of great things for quite some time... the wilderness terror movie RITUALS. In this movie a group of 5 doctors take a trip to the remote Canadian wilderness for a vacation. When their boots get stolen the man that organized the trip is the only one who was smart enough to pack extra shoes (despite telling everyone to bring extra shoes and he'd take care of everything else) he heads out alone to try and reach civilization to get help. The remaining group is soon terrorized by an unknown enemy, with beehives being thrown at them, underwater bear traps, and various other traps and torture tactics. I've heard that this was one of the most intense movies of this type and it failed to live up to the hype. The main flaw for the film is that all five doctors are just plain unlikeable. They bitch and complain and while their situation sucks, it wouldn't be a big deal had they packed extra shoes while taking a fucking vacation in the woods. That is common sense. There were some worthwhile moments, but overall it just wasn't great. I have to say that I think some of the hype for this movie is built around the expensive out of print DVD from Code Red that typically fetches over $50. Not bad but far from classic.