There were only a couple of movies for these days, these shitty movies are really catching up to me. I doubt I'll watch more than a couple more before the month is over as I'm really just letting my brain reset for a busy month of new disc reviews in May. 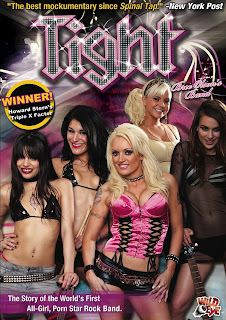 TIGHT is a mockumentary/documentary/reality TV show sort of movie about 4 porn stars that form a rock band and are managed by former Charlie Sheen girl Bree Olson. The 2 hour movie follows their trials and tribulations of trying to make it on their first tour. I have no idea what this is really supposed to be. Parts seem line a genuine documentary, and they actually do play their instruments (believe me, they're shitty enough that no one would ever fake it) and some of the drama between the girls seems legit but there are other parts, including just about any with Bree Olson that seem so poorly staged that I just don't fucking get what the movie is going for. It is infuriatingly stupid and the music sucks. 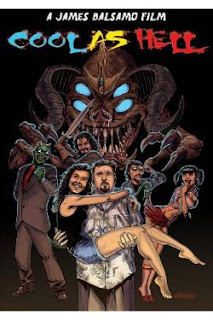 Then there was COOL AS HELL. I've finally reached the end of the James Balsamo movies. This one is about... well I don't really know what the fuck it's about. There is a nerdy guy who ends up hanging out with a demon who still can't get him laid. Then there is a woman with witchcraft and zombies. And a hairy demon arm that kills people? I don't know. It's a fucking mess. It is mainly just the nerdy guy in a Hawaiian shirt going around and getting dissed by ladies for the majority of the movie. Just avoid it.