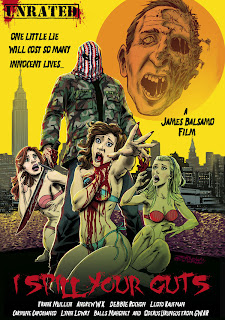 Remember Hack Job, and how I said there were 2 more movies from that director? Well I SPILL YOUR GUTS is one of them. After we get by the two minutes of elementary school vocabulary lesson, five separate screens listing the over 30 bands that provided music to the movie and not one but two title screens (I have no idea why there are two), we get to the movie, or what little of a movie there is. Dennis is a soldier who heroically took a bullet for his friend in the war and is on his deathbed when his friend basically shits all over him and tells him that he's going to change the story and take credit for being a hero. I don't really know how letting your friend get shot and die in war is being a hero but hey, I've never served so who am I to say. Dennis gets pissed and comes home, either dead or alive, I'm not sure which, and goes on a killing spree. The movie is basically moving from one kill set up to another without any real story stringing them together. There is a lot of amateur effects, some boobies and butts and an extended metal concert sequence for no real reason. So, yeah, there it is. Is it good? Nope, not even close, but at least it is better than Hack Job.

Next up was SS EXPERIMENT LOVE CAMP, which rounds out the triple feature DVD set that included the previous two nazisploitation flicks that I actually enjoyed earlier in the month. Could SSELC make it a hat trick? Could I actually find 3 Nazi exploit movies that I find good without knowing anything about them prior to viewing!?... No. This one is the story about the Nazis gathering some nice looking women and subjecting them and soldiers to weird sexual experiments together and trying to create the perfect race, even more perfect than the Aryan in their eyes. Well, there are a lot of naked women, and some weird stuff going on, as is the case with most of these movies that I don't find to be worth a second viewing. The last 20 minutes of the movie pick up and become entertaining and really save the movie from being a total bore and turn it into something simply mediocre. 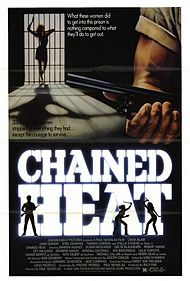 The night rounded out with another first time viewing, and one I'd been wanting to see for a while. CHAINED HEAT is a women in prison movie starring a not so innocent Linda Blair, the never innocent Sybill Danning and John Vernon from Animal House. Blair stars as a first time inmate in a rather nasty and corrupt prison after she accidentally killed a man with her car. Her innocence is slowly stripped away by the drugs, race wars and prostitution run by the guards and the warden himself. Art truly imitates life as this is not the cute little girl that is being possessed by a demon in The Exorcist. Blair is on full display here in her first nude scene and is surrounded by lesbianism, murder and rape. I can easily see why this is considered one of the best Women In Prison flicks around.