The Exploitation/B-Movie challenge is underway and what better way to start off than with a little Kaiju goodness? 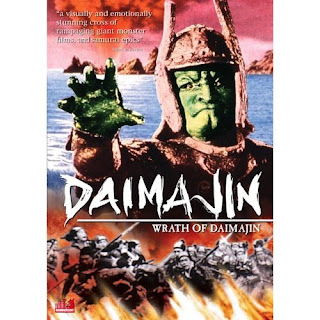 DAIMAJIN STRIKES AGAIN is the final chapter of the Daimajin trilogy of 1966. All 3 of these films are excellent films mixing period drama, a bit of samurai and of course the giant monster who is the mountain God. This particular entry follows 4 young boys as they try to cross the mountain in an effort to free their enslaved fathers who are being forced to construct buildings for an evil warlord to build rifles in to take control of other neighboring areas. The boys have to rely on praying to the Daimajin for help and after the warlord's men piss off the Daimajin, the boys have their prayers answered. I highly recommend this series as it maintains a high quality all the way through and mixes a few different Japanese genre standards together nicely.


Not to be confused with the vastly superior Sister Street Fighter, LADY STREET FIGHTER is the tale of Linda Allen, a woman who is hell bent on revenge for the murder of her sister. She encounters all sorts of crooked people including gangsters, drug dealers and hitmen. The movie has all the makings for a classic exploitation romp with car chases, violence and nudity on full display throughout the film but it lacks any real talent to pull it together. There are a few moments that make LSF border on so bad it's good territory but unfortunately, like the dialogue coming from Linda Allen's mouth, it is mainly just bad. There are a couple of scenes that save it from being a total waste of time.

There was one movie left in a triple feature boxset that I hadn't seen with LSF out of the way, so I figured I'd watch it. That movie was REVENGE OF THE BUSHIDO BLADE, perhaps better known as THE LAST REUNION. This had the potential to be a really good rape/revenge flick but never even approaches the proverbial line let alone crossing it. A young Japanese boy watches his military general father get gunned down and his mother raped and murdered during WWII and vows vengeance for the evil deeds done to his mother. Decades later he is trained in various forms of martial arts and enacts his vengeance on the men responsible. The first problem is how much time this movie spends doing nothing but showing the men in bars or restaurants. It makes the movie that could have been successful at 80 minutes run about 98 minutes and it drags badly. The next is that almost none of the revenge killings get any sort of on screen payoff and they're just bland as hell with the emotion a board has when it is being nailed to the wall. This was definitely a wasted opportunity at something at least memorable. 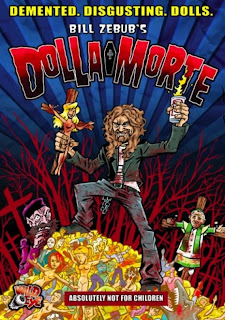 If you don't like dead baby jokes or racism jokes or anything of that nature you can just go ahead and skip this now. I'm of the mind that jokes are jokes and can be funny no matter the subject matter without any real meaning. DOLLA MORTE definitely plays to people with an open mind as far as humor goes... it is made completely with dolls and action figures and is about the world going to shit and everyone hating each other essentially. There is Hitler in space in the SS Enterprise (get it?), A resurrected Jesus sucking himself off while on the cross and various other jokes involving poop, blood, farts and cum. It's all pretty fucking stupid but it is done well enough (as well as something like this can be done) that if you like this type of thing (think Robot Chicken meets Celebrity Death Match meets shock value humor) then I guess it is worth checking out. It gets an extra half point for having a cool Rammstein song.