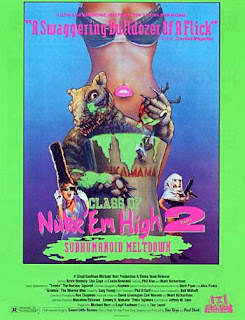 Another pair of movies today, leading off with CLASS OF NUKE 'EM HIGH 2: SUBHUMANOID MELTDOWN. This is follows up one of the best Troma movies pretty nicely. It takes a sillier, more gross out approach than the first and it mostly works. There is a lot of dumb humor, and slime and sludge. And a giant mutant squirrel. If you're a fan of the first movie or Troma in general you'll enjoy this one. 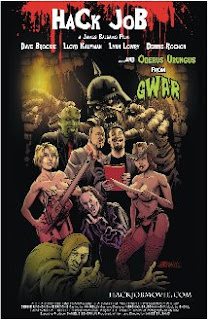 And then there was HACK JOB. This is an independent horror film on DVD from Wild Eye Releasing... I have no idea what the hell I watched. It started off with a funny little follow-the-bouncing-ball song and then the movie actually happened. There were Nazis and mummies and a lot of pandering to Troma and Lloyd Kaufman and tits and side plots that were pointless. The tits were cool and some of it did actually manage to entertain but it took forever getting wherever it was going at that particular moment. The movie dragged and dragged. I have two more movies from this director to watch and I hope they're better than this.