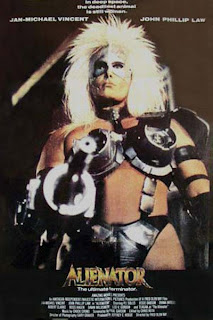 There were 3 movies across days 20 and 21, starting out with ALIENATOR. This movie rounds out the Action 4 Pack DVD set from Shout! Factory that also had Exterminator 2, Cyclone and Eye Of The Tiger, all which I enjoyed this month. ALIENATOR was the disappointment of the group. A fugitive alien being comes to Earth and shacks up with a local group living in the woods when he is hunted by the title character, a platinum blond killing machine that looks like something out of American Gladiators on weird Sci-Fi steroids. There is some cheesy action and a few entertaining scenes but overall it falls flat and isn't anything special. 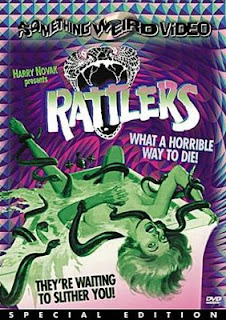 RATTLERS was next, a mid 70s Eco-terror type flick about killer rattle snakes terrorizing a small desert town. This movie plays out exactly how you'd expect if you've seen any similar animal terror type flicks. The movie has a single moment at the beginning that is very nasty where a pair of young kids, no older than 10, fall into a den of dozens of rattle snakes and pay the ultimate price for their misstep. After that the movie goes downhill. 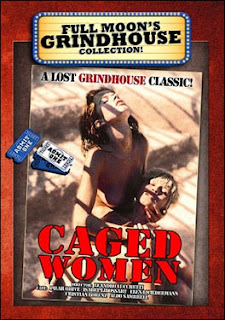 The final movie was an Italian produced Women In Prison flick, CAGED WOMEN, from 1991. This is part of the Full Moon Grindhouse DVD Collection and looks a lot better than I thought it would based on Charles Band having anything to do with an old film transfer. The movie is actually rather entertaining and sleazy as hell. A bunch of naked women fighting for their escape from a secluded island/jungle prison. It doesn't reinvent the wheel but it does what it does pretty well.