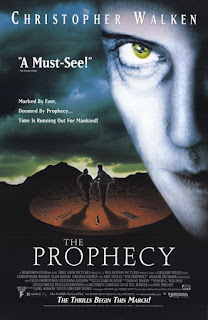 Today started off with a double feature of THE PROPHECY and THE PROPHECY 2. I'd never seen either and when I saw the 5 movie set in a Wal-Mart dump bin for $5 not long ago I couldn't resist. Well, the first couple movies in the series are just about on par with each other as far as I'm concerned and they are nothing to write home about. They're middle of the road religious themed action horror flicks with decent names in their casts. The story of the angels in the middle of their 2nd civil war and taking it to Earth is better than the execution gives us which is a shame because it could have been a really entertaining flick with supernatural phenomenon going wild. As it stands they're very 90s flicks that may be worth re-visiting down the road to see if I find them any better. 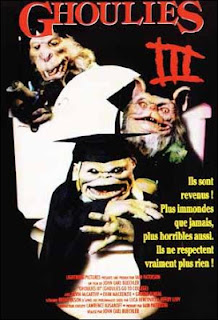 I dumbed down the viewing for the next one with GHOULIES 3: GHOULIES GO TO COLLEGE. I didn't think the first film in this series was anything special as far as stupid, raunchy horror comedies go but the second had a lot of laughs and this one is fun too but there is a lack of Ghoulie action for much of the film. They're around but they don't do a whole hell of a lot. I intended this to be a time waster and it did the trick. 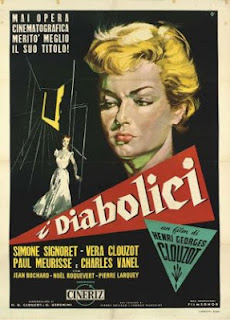 I again switched it up and busted out the Criterion Blu-ray of DIABOLIQUE. I've wanted to see this movie for years and finally got the chance. It's late as I'm typing this and I'm exhausted but it was fantastic. A little straight horror, a little psychological, some cat and mouse for good measure. It is a classic for good reason. 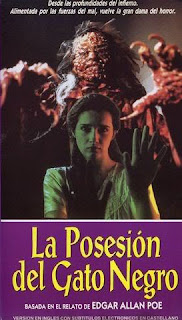 Viewing finished up with THE BLACK CAT aka DEMONS 6. This is a Luigi Cozzi directed film based partially on a story by Daria Nicolodi. Nicolodi intended the story to be the conclusion to Dario Argento's Three Mothers trilogy but it ended up as this. With no real connection to either Poe's story or the Demons franchise, it does act as a conclusion to Argento's trilogy even though he wasn't involved... sort of. It mentions the three mothers, though the mythos is changed a bit and Argento and Suspiria are name dropped (with Suspiria's theme being used multiple times). Its a mess of a film. A stupid mess of a film. A really stupid awful mess of a film. But I found it sort of mesmerizing in just how "out there" it was. It didn't make sense in many parts and nothing particularly exciting happens but I was entertained slightly. I couldn't tell you why. I should hate it and I should rip it apart. I won't. I enjoyed watching it more than plenty of other movies this month and I'm not certain why.