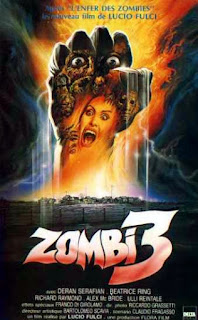 A few beers with a Lucio Fulci/Bruno Mattei zombie flick? Yes it is a fun time and yes it can only be ZOMBI 3. I haven't watched this flick in easily 5 years, and had been anxious to watch it again. I know many folks don't like the sequels to Fulci's classic Zombie/Zombi 2 but I find them all to be varying levels of fun cheese. It was funny watching this one now as I had never noticed how many scenes it lifts from various other zombie flicks including one that was just a daytime recreation of a part from Return of the Living Dead. That is the kind of thing to be expected from a cornball Italian zombie flick of the late 80s though and Fulci/Mattei make a fun and entertaining piece of trash. 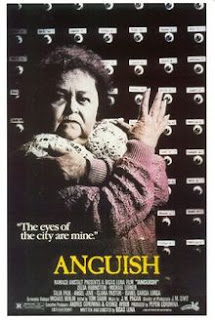 After some sleep I woke up and threw on ANGUISH. I wanted to get to this flick during the exploitation challenge back in April (did you read those posts? You should) but never did so it sat on the shelf until today. I was surprised by how well made and directed this movie within a movie was. It falls short of being an excellent horror film because arthouse director Bigas Luna spends a bit too much time on a few scenes that are of little consequence, at least within their drawn out nature and it causes the film to drag in the first half. The second half is pretty fucking great though and without going into details that will spoil the film it is a great piece of horror that offers up the much asked question of how dangerous can a movie be? 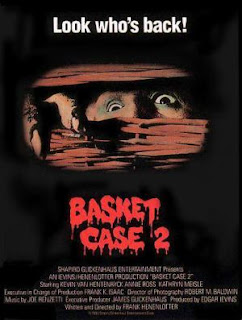 BASKET CASE 2 was next, a sequel I'd wanted to see for a long time as I love the first. This one was decent but disappointing. It did have the same twisted sense of humor that Frank Hennenlotter is known for which was great but overall the movie just falls a bit flat when compared to the first. It did have some good action and the creature effects are really cool. 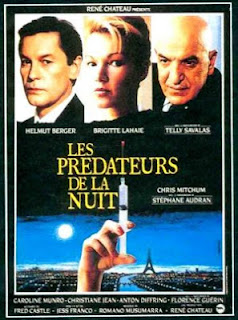 The day wrapped up with a repeat viewing of Jess Franco's FACELESS. I think Franco is very, very hit or miss with everyone but I think he does a good job making this one a piece of enjoyable sleaze. Beautiful women are abducted so that their faces can be surgically transplanted on to a doctor's deformed wife with tons of gore and just all around good family fun.

Basket Case 2 could never be as good as the first, but I thought it was fun. You need to check out number 3 if you haven't seen it. I haven't watched it in years, but the image of Belial with a robot body is forever burned into my mind.

I need to check out a Jess Franco film, as I've never watched any of his movies, and this one sounds interesting enough that I might give it a shot.

Eileen - definitely check out reviews on Franco's films before digging in to them... the man made plenty of crap.

Shawn - I have the new dvd of 3 to review so I'll be getting to that next month.

Zombi 3 is one of my favorites pieces of shit. I could watch it over and over again. It's atrocious, but it's amazing.

I haven't seen the other ones... although I've been meaning to see both Basket Case movies for a while.

Don't let my score on Zombi 3 fool you, I love it