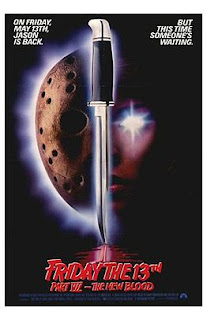 I needed some Jason in my life so I popped in FRIDAY THE 13TH PART 7: THE NEW BLOOD. It isn't my favorite of the bunch but I do like Kane Hodder as Jason quite a bit. You probably already know all about it... cheesy, fun, boobs and blood. And a party blower through the eye. And any slasher fan knows this is where the sleeping bag kill happens and not the hologram in Jason X. Fun late night flick. 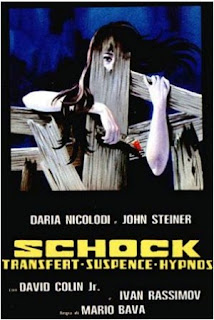 There has been a lack of Mario Bava this month and I decided for my 100th film, Bava is a good choice. SHOCK was number 100! This was Bava's final theatrical film before his death a few years later and unfortunately it is a rather pedestrian affair. It has a lot of that weird vibe many Italian horror films have but it doesn't do much with it. There is a bit of gore and some... shocks but it is mainly a kid being really weird to his mentally fragile mother. The film almost succeeds with this part of the film since kids are generally really weird and creepy. As it is, it borrows heavily from The Black Cat lure, adds in a bit of weirdness and a tiny bit of gore but never really does anything with it all. Not as bad as I'd feared hearing some reviews but certainly not up to snuff with Bava's classics.