Just a pair of movies today as much of the day was spent hanging out with friends watching the Ravens game (this could be considered a horror movie itself) and carving pumpkins. My Cthulhu pumpkin turned in to a complete disaster so I guess that is a horror story too... anyways... 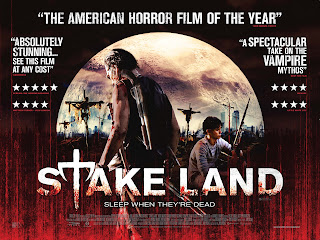 STAKE LAND is a movie that is a couple of years old that I picked up for $10 on Blu-ray a few months back at a local used shop (of course by the time I watched it the price falls to $10 new... oh well) and I'd been pretty anxious to watch it. It is somewhat of a coming of age story set within the vampire apocalypse. Dirty, old Pennsylvania towns provide a nice backdrop for the story and I'm sure minimal amount of set dressing was needed to make these spots look spooky. The acting is pretty strong from the entire cast, especially our star who is an adolescent trying to deal with growing up in a very scary, turbulent world where bloodsuckers are a very imminent threat. His companion, known only as Mister, provides the father figure but overall is written weakly. He never quite reaches either the level of mentor badass that I thought he should. The film has a very somber, bleak tone throughout that really works well. Overall a good movie that I enjoyed. 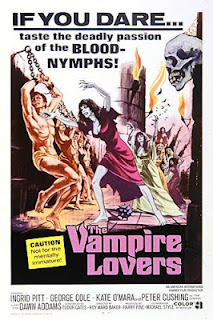 And finishing the Hammer double feature DVD I started the other day with Countess Dracula was THE VAMPIRE LOVERS, also starring Ingrid Pitt. This was one a bit more satisfying than the lackluster Countess Dracula. The addition of Peter Cushing, even in his minor role, no doubt aids to the film's success. A sexy lesbian tone adds to the horror elements and provides an entertaining 90 minutes. Not top notch Hammer, but worthy of seeking out.