Only a pair of movies in today. Hopefully that means the batteries will be charged for Friday. 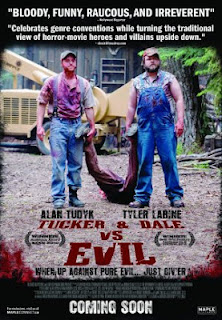 First off was TUCKER AND DAVE VS EVIL. I'd been wanting to see this for a while and was pretty excited to finally dig into it since most of the reviews I'd read were positive. It was a bit different than I expected, I never read too much into the plot details so I was expecting some sort of monsters and not douchey college kids to be the antagonist. It worked out okay but I couldn't help but feel a bit cheated. The humor which is the basis of the entire film was very hit or miss with me and sometimes it just fell flat. The movie was largely entertaining however and there were plenty of laughs to be had and action was plentiful. Its heart was definitely in the right place. 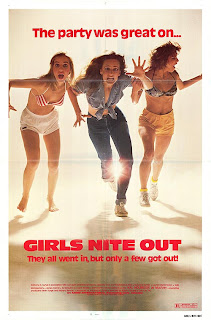 And I squeezed in another slasher film before the day ran out, GIRLS NITE OUT from 1984. The story is nothing special, and actually plays out very similarly to Unhinged from earlier in the challenge. This one had potential to be a stand out slasher film, at least on a superficial level. The killer wears a silly bear costume through most of the film which stands out among other slasher icons and there is a big body count. Unfortunately much of the violence is off camera. It scores bonus points for having a Creature From The Black Lagoon and Werner Herzog's Nosferatu poster in the background of a scene.

I have "Girls Nite Out" on one of those 4 movie packs, the same one that has "Unhinged," I think. I was hesitant to check it out, though, because it looked to be of dubious quality. Maybe I'll give it a watch.

I have Girls Nite Out on one of the triple packs from Shriek Show/Media Blasters. It also has Blood Sisters and one other movie that escapes me. It looked fine. Unhinged looked okay too on it's individual dvd.