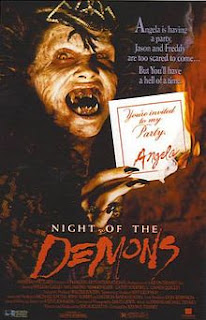 A late night viewing of the 80s classic NIGHT OF THE DEMONS got the day started. This is just a fun, cheesy romp as far as I'm concerned. It is no piece of art but there are some cool effects, a fun yet spooky atmosphere, Linnea Quigley once again bearing the good, and a mostly unrelated yet awesome ending. It pretty much sums up stereotypical 80s horror, but in a good way. A total popcorn and beer flick. 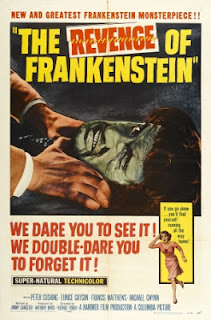 A Hammer Frankenstein double feature was next, first was a re-watch of THE REVENGE OF FRANKENSTEIN. Peter Cushing reprises his role as Baron Frankenstein and is flawless as the doctor. This is the first sequel in the series and is right up there with Curse Of Frankenstein. 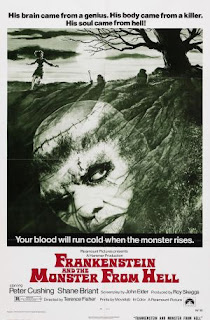 The second half of the double feature was FRANKENSTEIN AND THE MONSTER HELL, the 7th and final entry into Hammer's Frankenstein cycle. Cushing reprises his role for the 6th time (Horror Of Frankenstein isn't a sequel, more or less a remake of the first) and again, is fantastic. The monster in this flick is rubber suit greatness and there is some cool gore as well. Not the finest effort in the series but enjoyable and is a respectable end to the series and director Terence Fisher's career.

The 2nd episode of American Horror Story rounded out the day. The new season is still really interesting through the 2nd episode.