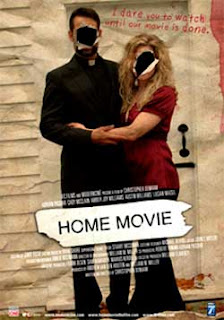 HOME MOVIE... ugh. This is a found footage movie from 2008 where a seemingly picturesque American family videotapes seemingly every thing they do. They just moved in to a new house and their kids have started to take on anti-social behavior. They're twins, a boy and girl, that sleep in the same room, and all to often the same bed. Their mother is concerned as they're now 11 years old and getting to old for it. Besides that, they never talk, they turned the pet goldfish into a sandwich, killed a frog in a vice grip and crucified the family cat. You'd think any one of these things would be enough for the parents, a doctor and a priest by the way, to have them checked out for any possible social or psychological abnormalities. Nope, the father doesn't do much except occasionally have a drink and the mother tries her own half assed psych exam. Spoiler alert, the kids end up killing the parents. Where is the fucking common sense or logic in this movie? It totally fails because it wants to be based in reality but the parents, educated adults mind you, do nothing to try to get help for their obviously disturbed kids until it is too late... and then somehow because it is Easter the kids don't go to jail? Uh... what? Fuck this trash. 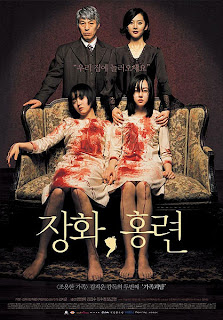 Later in the day came a film from Kim Jee-Woon, a director I've enjoyed just about everything I've seen from- A TALE OF TWO SISTERS. I wasn't sure if this was going to be my thing or not as it was made in the heart of the Asian run of "spooky ghost" movies that were so popular only a decade ago. This has flashes of that but it quite a bit more psychological and sort of beautiful in its sadness. I didn't love it, but I think this type of film certainly lends itself to deserving multiple viewings. I'll tally this one up as another film I like from the director. 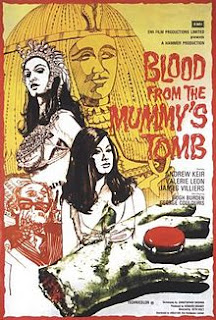 BLOOD FROM THE MUMMY'S TOMB was up next, a Hammer film based on the Bram Stoker novel The Jewel Of Seven Stars. I've never read the novel so I have no idea how faithful it is or how it stacks up but the film was a marginal success. The idea of the film was better than the execution, which isn't all bad but was obviously hurt by the production's troubles. Peter Cushing was all set to star until his wife fell ill and he had to pull out of the project a day into filming and director Seth Holt died on set with a week left of filming. This is the sort of thing that can really mess with a film. 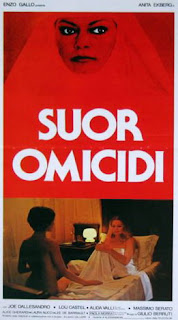 The last film of day 23 was KILLER NUN. I've had the Blu-ray from Blue Underground for a few months and decided to bust it out. The story is about a psychotic, drug addict nun, who is just all around batshit crazy... how can this be bad you may be asking yourself? Before seeing this film I was saying the same thing. The sad truth is that it swings and misses so bad the bat comes back around to knock itself stupid. This movie sucks. It is a boring mess of 88 minutes with a couple of boobs and a little bit of blood to try and keep the audience satisfied. It is beyond melodramatic and stupid. I kind of wish that scene from Nightmare On Elm Street 3 where Freddy smashes the girl's head into the TV and says "Welcome to prime time, bitch." happened to me so that something would have happened. Alas, I wasn't that fortunate. At least it had boobs unlike a shitty found footage film from earlier in the day...