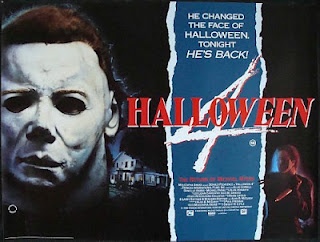 Day 5 got underway before going to sleep after day 4 with a viewing of the new Blu-ray of HALLOWEEN 4. This has been a favorite of mine for many years and the new disc looks great. Michael Myers is arguably at his most violent and unforgiving in this one. A thick Halloween atmosphere really adds to the feel of the film. It's always a joy to visit this one and now that it's in high-def it'll be even nicer. 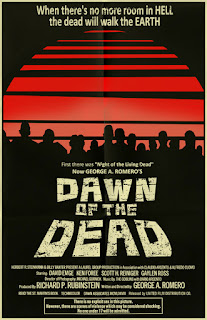 I was in the mood for a familiar zombie movie so DAWN OF THE DEAD was up next, also on Blu. What can I say that hasn't been said before? A classic film that is always a blast to watch. 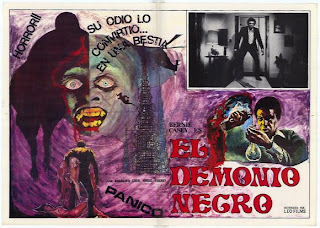 I've had the DVD of DR. BLACK, MR HYDE sitting on my shelf for a couple of months and today was the day for it. If you can't figure it out by the title this is a blaxploitation take on Jekyll & Hyde. While this was an entertaining piece of 70s exploitation horror it was a bit lite on both the blaxploitation and the horror and what could have been a classic piece of trash ends up being an entertaining movie but a missed opportunity. 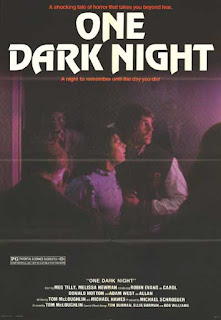 Maybe it's a sign that I'm getting old but there have already been a few movies during the first 5 days of this marathon that have high school or college kids playing a large part that just absolutely drove me nuts. ONE DARK NIGHT is the latest culprit, although my disdain for the movie could be unjustly blamed on the main characters of high school girls and be put squarely on the shoulders of the writing which is complete fluff until an hour in to the film. Everything important in this movie would make a nicely timed TV episode at around 45 minute. We have a group of girls initiating another into their club by making her stay overnight in a mausoleum. Little do they know that a recently buried man had telekinetic powers in his life and can still use them from beyond the grave. He creates chaos around the building unleashing corpses to attack the kids. There is actually some worthwhile material in here but it all goes to the special effects department creating some nasty looking rotten corpses of varying stages of decay. This was directed by Tom McLoughlin of Friday The 13th Part 6 fame (one of my favorite entries) and was his first feature film. Better pacing would have worked miracles for this film. 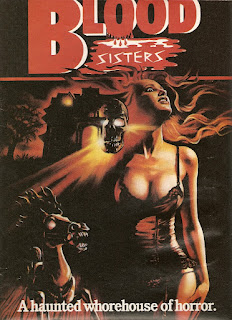 BLOOD SISTERS was next and it was the final movie in the triple feature set with One Dark Night and Girls Nite Out. It was garbage. Some girls spend a night in a haunted brothel to pledge for a sorority and there's a killer and ghosts and an obnoxious girl who reminded me of Thelma from Scooby-Doo without any of the charm. Yea, it was just pretty fucking terrible. 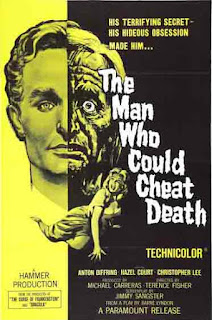 I had to bring a little class in to the rotation after that so I busted out the Blu-ray of THE MAN WHO COULD CHEAT DEATH that has been sitting on my shelf for well over a year. I'd never seen this earlier Hammer film that has a great cast including Christopher Lee and Hazel Court and Anton Diffring. The story was solid but the movie played out a little too slowly and conventionally. The cast was great of course and it was a solid film. A worthy part of Hammer's catalog. 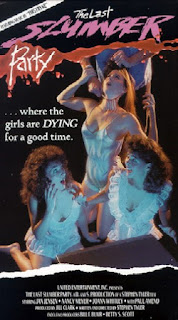 The day's viewing was wrapped up THE LAST SLUMBER PARTY. This late 80s slasher is one of the biggest pieces of shit I've ever seen. I wanted to give it credit about 20 minutes in just for being low budget and getting the movie made but after sitting through the rest of its 72 minute run time I wanted to stab my eyeballs out and feed them to a gutter cat. I don't know if I've seen a movie this short drag this much. Sure, stuff is happening, there are kills happening but none of it fucking matters. There is no emotion in anything going on. Not the acting, not the soundtrack, not in the writing. Nothing. Hell, the Goddamn movie is over at the 60 minute mark just to have 12 minutes at the end where it can say "fuck you!, we gotchya for 12 more minutes!" and it turns into a bullshit dream sequence. This is an infuriating piece of trash that I would wipe my ass with if I wasn't so sure that it would find a way to start playing the movie from within me and make me relive the nightmare all over again.