Viewing for day 6 was shortened by a party friends were having but I was able to get in a trio of first time viewings. 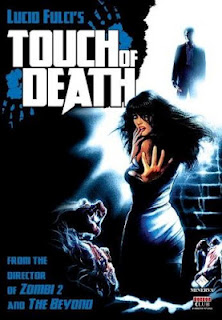 Lucio Fulci's TOUCH OF DEATH was the first and it is one that I've always heard mixed things about. I've heard it's one of the better films in the latter part of Fulci's career and I've heard that it is complete garbage. I agree with the latter. The film is totally devoid of any style or atmosphere and has very little entertainment value outside of its gore level, which is plentiful. The film is mean and has plenty of violence but very little of anything of any real merit. It will certainly satisfy gore hounds but I can't recommend it. 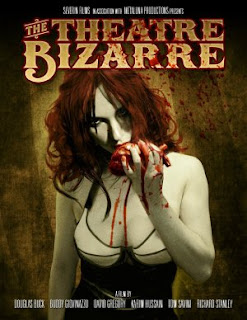 Next up was THE THEATRE BIZARRE, an anthology film based around what a young lady sees after entering a rundown theater. The wrap around story is great led by Udo Kier as the host. There are six other segments directed by names such as Tom Savini (Night of the Living Dead), Buddy Giovinazzo (Combat Shock) and Richard Stanley (Hardware) among others. Stanley's entry "Mother Of Toads" is quite good and probably my favorite of the bunch. Each story features a narrative based on love and relationships but each is quite different and presents the horror in different ways. "The Accident" is the most unique of all of them and is tragic and has a somber tone while "Sweets" is a bit more comedic. Overall it is a good modern day anthology of horror and I'm definitely interested in seeing the sequel that is planned. 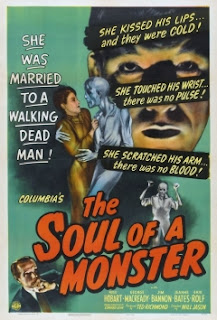 Finally was THE SOUL OF A MONSTER from 1944. This is a pretty unremarkable film that just killed some time for me. It did its job but wasn't anything special or that is worth seeking out.

Awwwww... I loved "Touch of Death"... It's TOTALLY mean, but I thought that's what made it funny. Maybe that makes me mean. Well now I feel like an ass.