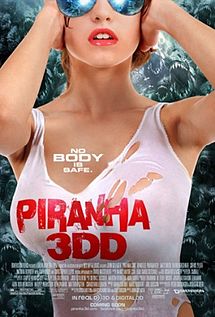 I'm a big fan of the original Piranha and its 2010 remake from Alex Aja. I have the sequel to the original planned for later this month but today I started with the sequel to the remake (is this getting confusing?) the aptly named PIRANHA 3DD. I was extremely excited about this from the first day news broke of its development and as it started getting a more ridiculous cast with each new name announced I felt like I was in for some extremely entertaining cheese. Then John Gulager's name got attached and I had to hope he didn't fuck it up. Well, the movie is short, about 70 minutes not counting the end credits and it just never quite gets going. The moments I hoped would fill the movie are there, but not in the volume or regularity I was hoping for. This movie was never going to be high art but I was hoping for something better than what it was. It's almost like John Gulager decided to blue balls everyone hoping for a really fun time and just give them a few fleeting glimpses of it. Overall it wasn't terrible (not as bad as some reviews make it out to be) but it will dwell in mediocrity forever. I had a free Redbox rental code that was only valid for one day so I decided to rent THE LOVED ONES, an Australian film from 2009 that just recently got released in the states on disc and has gained some attention. This is essentially a short film stretched to fill an hour and a half. There is so much filler here it isn't even funny. The film is about a girl and her father who kidnap and torture boys that are mean to her, and when Brent, our main boy declines her invitation to the school dance she gets daddy to bring him home to her so they can have their fun one way or another until he is able to turn the table and his girlfriend finds him. Plenty of violence here but it's nothing we haven't seen done before in other "torture porn" flicks. There's a twist but it too doesn't play any significant role in the film. This would be a solid short film but just becomes drawn out at an hour and a half run time. 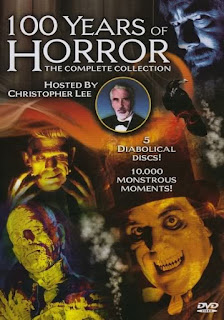 I checked out a couple entries into the series of documentaries 100 YEARS OF HORROR. This series from 1996 is hosted by Christopher Lee and each segment focuses on a different aspect of horror. I picked out "Mutants", "Demons" and "Freaks". Each segment features interviews and film clips to give a brief overview on that area of horror. While they are interesting, they barely start to scratch the surface before they come to an end. 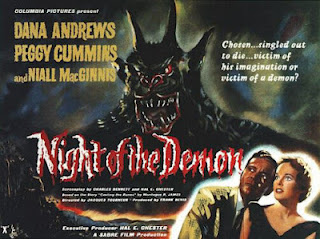 The day's viewing ended with a movie I had seen bits and pieces of over the years but never the whole thing, Jacques Tourneur's NIGHT OF THE DEMON. This is a really cool film that just has an air of uneasiness about it thanks to a terrifying set up. Thick atmosphere and cool special effects used just enough keep the tension built. And a couple of great performances from our lead protagonist and antagonist make this one a winner.

Jon Gulager fucks everything up.