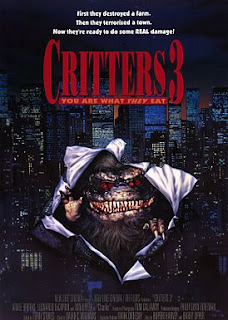 The original plan was to start day 3 was right around midnight after I finished the write-up for day 2 and pop in Nekromantik. Well after a few minutes in to that it was clear that my burned copy wasn't going to cooperate so I went to plan B, CRITTERS 3. Yes, a drastic change in mood and content but at that point I just wanted something to dig in to and get ready for some sleep. The second sequel of the series is right in line with the other films, it's corny, funny and just a little bit violent. Leonardo DiCaprio makes a very early appearance in his career as one of the main kids. Nothing extraordinary but it was a good fit to relax to. 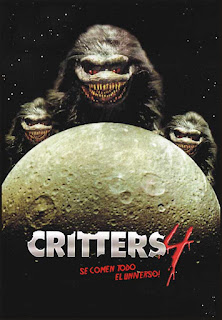 And then Critters 4 happened. I completely understand if you're not a fan of the series, they're nothing incredible but I found the first 3 to be cheesy fun. Critters 4 is a chore to sit through. Taking place on a spaceship it could have been a blast, cheesy sequels in space always have potential for hilarity to ensue. This was melodramatic space  bitching through the first hour of the film. The Critters hardly appear at all, and I'll take them raiding a kitchen in part 3 to having to hear the crew of this ship bitch at the malfunctioning control system. It figures they'd make the worst entry in the series the longest one too. This is on the same level as DeathBed. 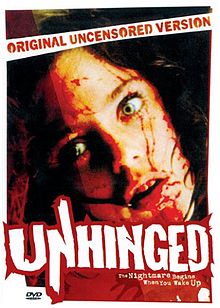 After a double helping of furry cheese I wanted something more serious so a random grab in to the unwatched pile gave me UNHINGED. This is a straight to video slasher from 1982 and to put it bluntly it's underwhelming. The kills happen mostly in cut-away sequences and for a film such as this the kills are the bread and butter. The acting is rather wooden for the most part, however the old mother and her daughter are good in their roles, however the twist is something that just has little impact on the film and falls flat. This film was a on the Video Nasties list but there isn't anything particularly nasty about it. Some nudity and some blood splashing around from off screen violence is all there is, and it isn't much of either. 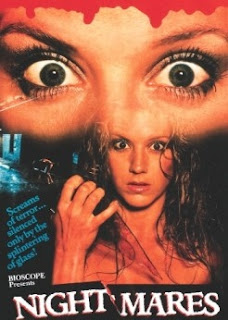 NIGHTMARES, hmm... I barely knew this film existed until it was mentioned in the Aussie exploitation documentary Not Quite Hollywood and when I saw the DVD for a low enough price I grabbed it for the challenge. This film really tries to break out of the slasher film shell but fails miserably. This is a slasher film through and through. One look at the POV shots during the murder sequences will tell you that. It wants to be a smart and psychological film but it's just a sloppy mess. Editing leaves a lot to be desired as there are moments where I had to question exactly what the hell was happening. The soundtrack is the high point of this movie. 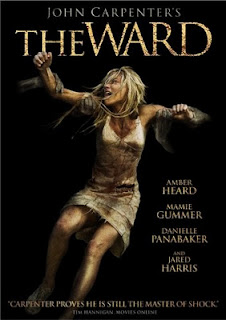 Since its release I've been hearing mixed things about THE WARD. This film has divided its audience and lead to a lot of hate and basing of John Carpenter's latest effort. After finally seeing it I have to say that I can see why it has divided audiences. The film is flawed, from its incredible overuse of jump scares to the ending that has been used over and over. While there are sequences that work, and I appreciate the attempt at building paranoia among the girls it ultimately feels a bit deflated and comes off as more of a TV movie than something Carpenter would be behind. It's not a terrible film, it honestly isn't even really a bad film it's just far too bland and typical for its own good. 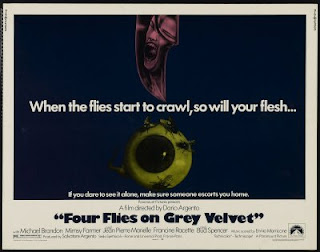 I decided to finally give the Blu-Ray from Shameless of FOUR FLIES OF GREY VELVET a spin. I've seen this giallo from Argento (the 3rd in his "animal trilogy") a number of times in varying degrees of print quality and this BD just blows them all away. It's beautiful. The movie is solid even if it has some ridiculous moments, they just seem to work with this one. The introduction of Godfrey into the film has one of the silliest soundtrack moments I can remember. It was a joy to revisit this and see it fully on Blu and not just scan over it as I had done. 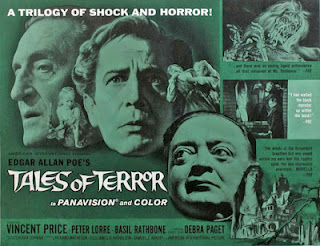 And the day will wrap up with TALES OF TERROR, an anthology film from Roger Corman and features appearances by Vincent Price, Peter Lorre and Basil Rathbone. The film features 3 Poe adaptations, Morella, The Black Cat and The Facts In The Case Of M. Valdemar. Morella is short and rather quick moving building to its fiery finale. The Black Cat has a lot more humor from both Lorre and Price than I expected but they pull it off with grace. It is quite funny but if you know the story you know exactly how this will play out. Valdemar features Basil Rathbone as a villainous man controlling the dead body of Valdemar, played by Vincent Price. All around a solid picture.

You definitely need to check out Nekromantik. It's a hard film to get into, but it all pays off at the end.

I had a couple of friends who saw 4 first and now refuse to watch any other Critter movies..which annoys me greatly!

Agreed about Nekromantik, and I even enjoy Nekromantik 2 (it has a great ending).

If you have the "Unhinged" that has the commentary track with a bunch of drunken horror fans riffing on the movie (it's on my DVD copy) I advise you to watch it. I was almost pissing my pants from laughing so hard.

I saw Nightmares in August for an 80s movie challenge at another message board, and was severely underwhelmed.

Both Nekromantik's are something I want to check out. I'm about to just spring for the retail copies.

And I saw the "comedy comementary" on the menu for Unhinged but didn't watch it. Maybe I'll have to watch that before getting rid of the dvd