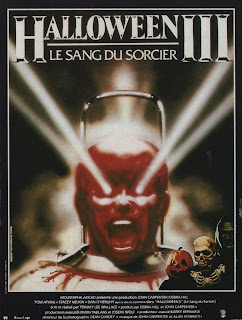 The first viewing today was one that I watch every year to get totally in the Halloween spirit, HALLOWEEN 3: SEASON OF THE WITCH. This is a great movie for the season and just as mean as movies get. It is also a lot of fun. If you are one of the people still hanging on to the "No Michael Myers so it sucks" idea lighten up and watch it because it is great every time I watch it. The new Blu-Ray from Shout Factory looks excellent too so support their willingness to release special editions of horror movies on Blu. 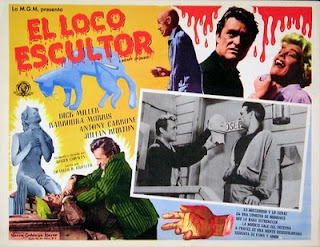 The next viewing was determined by the fact that I had just enough time to fit it in before the start of game 5 of the O's and Yankees so it automatically became the movie to watch. That would be A BUCKET OF BLOOD, a horror movie satire on the beatnik culture directed by Roger Corman and starring genre favorite Dick Miller. A quick moving flick about a loner who longs to be accepted by the cool artist crowd at the coffee shop ends up making sculptures of not so willing participants. The in-crowd eats it up of course. It works as both a successful satire and horror flick. 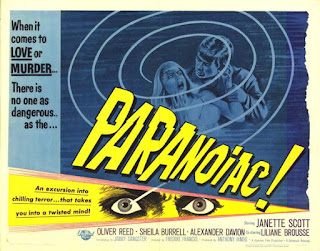 PARANOIAC was next and is a nice psychological horror film from Hammer co-starring Oliver Reed. Hammer vets Jimmy Sangster and Freddie Francis write and direct respectively and turn in a really solid product overall. The performances are top notch. I honestly felt like I'd seen it before though... I'm almost positive I hadn't but it felt familiar. Either way I'm glad I checked it out.

Next up I planned on checking out the Blu-ray of Phantom of the Opera, the Lon Chaney version but my piece of shit BD player decided that this will join the 8 or 9 other Blus that it simply won't play. It will recognize a Blu-ray is in the play but it won't load them. Fuck you LG. So I went with THE EVIL DEAD instead which gave me more headaches with the player until I remembered that I need to let the last preview play all the way through before the player will load the menu for the movie. What a fucking joke. I'm writing this as the movie plays because I've seen it a million times and it rules each and every one and I won't have time to post this tomorrow until well after I'd want to get it up. If you haven't seen this movie you're living under a rock and you need to. The Blu is like $10 and the 500 DVD releases can be had cheaper than that. 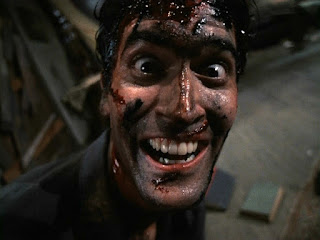 Posted by Celluloid Terror (Seth Poulin) at 12:02 AM