Day 29 wouldn't be held down by the hurricane. Hopefully no one sustained any serious damage if you're on the east coast of the US. A pair of films from director Gordon Hessler made up the day's viewing. Both of these movies were on one of the MGM Midnite Movies double feature DVDs. 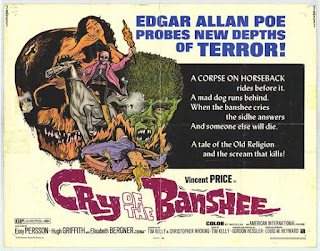 First up was CRY OF THE BANSHEE which starred Vincent Price as the head of a family who has been cursed and tormented by a werewolf type creature and black magic. The movie is pretty entertaining even if the werewolf costume is hokey and cheap looking. The director does keep to quick glimpses of it to try and mask that fact though. Decent flick, that ended up being the better of the two. 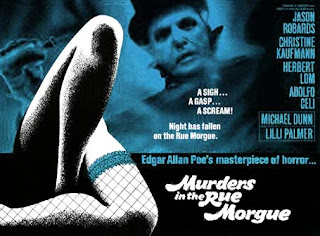 The second was MURDERS IN THE RUE MORGUE. While it had some decent performances and wasn't a bad movie it just dragged for me. Maybe another viewing when I'm not paranoid that the power will go out and I'll spend another week without it like the summer of 2011 may change my opinion on this one but as it stands it was really middle of the road and felt old and dated.