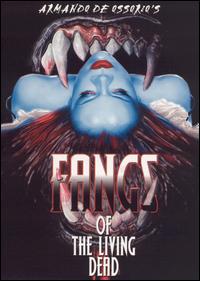 The first viewing of the day is a film from Amanda de Ossorio, the director of the Blind Dead series and a man that I have always found great enjoyment in his work. FANGS OF THE LIVING DEAD was a disappointment to be blunt. Apparently this was intended to be more of a psychological horror film but producer interference turned it into a sub-par vampire flick. There are some nice set pieces and a few worthwhile scenes but as a whole it is nothing special.

A spur of the moment viewing of THE GINGERDEAD MAN was next after watching some football with a few friends. It was more than a few drinks that lead to this and it was more or less just on in the background but it is still a mildly entertaining time waster. 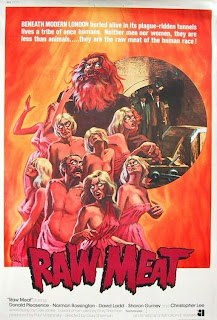 After checking out the season 3 premier of The Walking Dead, which was a really good start to the new season, I popped in RAW MEAT. This is a kind of strange flick with 100 year old cannibals living under the streets of London in an abandoned subway tunnel who capture people to eat and an asshole cop played by Donald Pleasance openly showing his disdain for London's artsier youth. It was a good movie that was a sort of breath of fresh air... just something a little different than what I'd been watching.