I figured I better get this posted before this big, bad hurricane shows us what it's made of (as of now it only light rain and small bursts of wind. Suck it Frankenstorm.)

Day 28 was rough... really rough. After a Halloween party the night before where I admittedly drank way more than any person should in one night I woke up to pancakes for breakfast but instead of eating them I fell asleep at the dining room table. Does missing out on pancakes count as a horror movie? 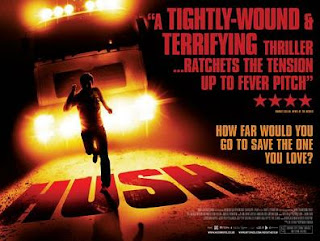 Anyways, eventually I did come back to life and got one movie in before I ventured out to catch the WWE pay-per-view which was absolute garbage.... sort of like the movie I watched. HUSH, a British film from a few years ago about a guy who abducts women in the back of his white box truck and takes them back to his dungeon of doom. It isn't actually called a dungeon of doom I just wanted to say that. A young, bickering couple spots this going on during a rainy road trip and decide to follow him since the police don't do shit about it after their call. The female half of the couple ends up getting abducted at a truck stop so of course the boyfriend now has to get even more involved. About half way through a young girl comes running out of the woods and gets in the boyfriend's car, exclaiming she had just escaped the man so they team up to go find the girlfriend. Soon after that the man looks at the girlfriend's phone that was left in the car and sees a text message from his best friend expressing thanks to the girl for the sex the night earlier. At this point the boyfriend should have turned around, said "fuck this bitch" and got hammered some where. Instead the movie continues, never gets interesting and ends with a bullshit happy lovey dovey shot.