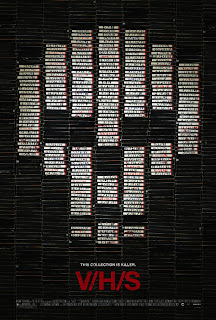 After recovering from the previous night's party and catching the Ravens game I was able to get back to movie watching. A couple friends and I watched V/H/S that one of them recorded when it came on TV in an early premier a few days ago. This is an anthology about a group of assholes that make money selling sketchy tapes and break into a house to find a certain tape but find a large collection of unmarked tapes. As they view the tapes we see what they're watching. All of them are found footage style movies recorded on anything from a pair of spy glasses to a video chat session on a laptop. The first segment and last segment were solid and the rest was pretty much a mess. Cheap editing techniques, awful writing and really stupid characters make it a failure. I did have a good time watching it with my friends though so it wasn't a bad experience. 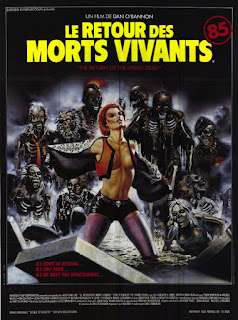 I needed a familiar favorite so I went to RETURN OF THE LIVING DEAD. I've talked about this film on here multiple times in the past and all I will say is that it is a safety blanket to pick my mood up. I love it endlessly and it is among my 10 favorite films of all time. 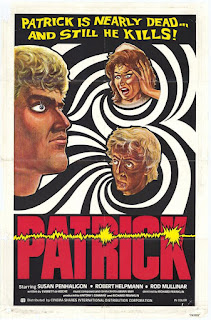 I ended the night with a viewing of the Aussie horror film PATRICK, about a comatose man who can manipulate people and objects to kill. The idea of the film is that could be great. Patrick is unconscious with his eyes wide open and its creepy and the performances are all solid but the film is very slow and has little payoff. I don't need a giant gore fest with a huge body count but this was a dull and dragged a bit for me.